MICHAEL FÜCHSLE - FROM THE WHEELCHAIR BACK TO THE ROCK

At 14 he started his professional career, which was suddenly stopped in 2003 after great success. But Michael fought his way back and now lives for climbing again.

At the early age of 6 he frequently went hiking with his parents, at the age of 12 Michael went to Konstein with his father to make his first attempts at climbing. A year later, the two climbed the Piz Palü - "Bellevista" (in one day) and the Biancograt on the Piz Bernina and heard the names Wolfgang Güllich, Kurt Albert and Sepp Gschwendtner for the first time. Michael asked himself, “climbing as a profession, is that even possible?” Apparently it could work. When he was 14, he had made up his mind, gave up school and told his parents that he would try his hand at becoming a professional climber. “Of course they weren't enthusiastic, but they gave me the“ OK ”for a year. If I didn't earn my own money in 1 year, I would have to start an apprenticeship. " 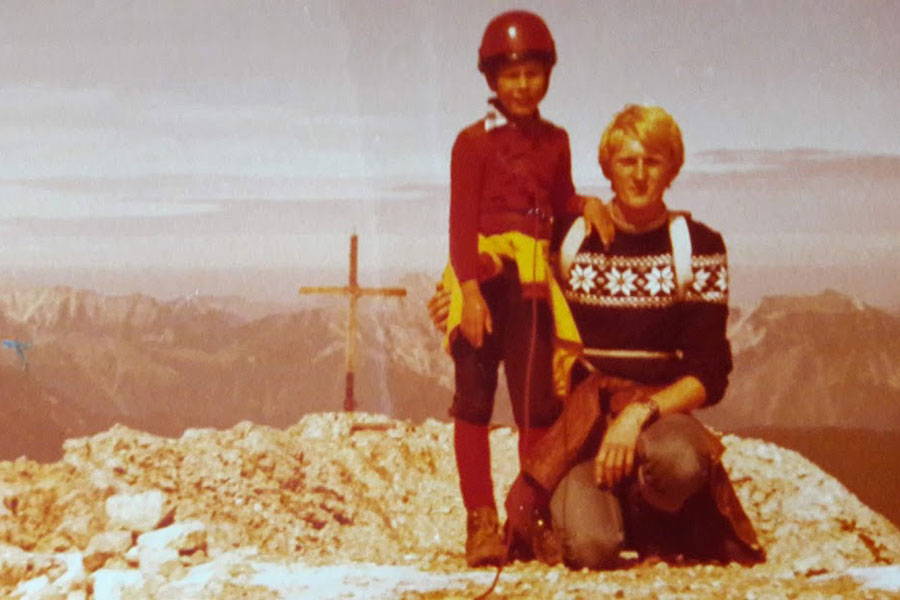 Michael drove to Konstein for days, drew the rock there, published a topo guide for this area and earned his first money with climbing. It wasn't enough to keep him alive, but his parents continued to support him. At the same time, Michael accelerated climbing training, got better quickly and traveled to many climbing areas in Europe and of course the free climbing mecca of America at the time. He got into the press, found sponsors, and made a living. Michael climbed the 10th degree, published several topo climbing guides about the climbing areas in Cortina and Trieste (including Slovenia), the climbing magazine "Onsight" and at the same time founded the clothing company CIAN. “At that time I even attempted a first ascent on the north face of the Eiger. It would certainly have been a route with a 10th level of difficulty if the weather hadn't changed. "

At 18, Michael had ulcerative colitis, a chronic, i.e. diagnosed long-term / lifelong disease of the large intestine that usually runs in episodes. Michael had the disease under control until 2003, then his condition worsened. “I couldn't climb anymore, a bad time was about to begin. The doctors increased my cortisone dose to 100mg per day for relief. It actually got better, but I forgot about climbing. Life was no longer worth living for me. I neglected everything, didn't feel like doing anything anymore. Of course, that had an impact on the companies I founded. "

In 2005 there was an “intestinal breakthrough with absolute blood poisoning”, Michael was in a coma, was artificially ventilated, got pneumonia and, due to water deposits, weighed almost 100 kg instead of 63. After 16 days he woke up from the coma and was ventilated for another 20 days. After four weeks his life was out of danger and after 10 weeks he was allowed to get out of bed for the first time. "I was ambitious and really wanted to go to the New Year's Eve party in the cafeteria"

Michael quickly realized that there was still a long way to go before he could make his first attempts at walking. “I remembered when I started my professional career as a climber and when only the“ iron will” counted. So he fought his way forward bit by bit. His physiotherapists only called him a "fighter pig". But it would take another 10 years until Michael, who was certified by the pension office as having a 90% severe disability, touched a rock for the first time. On a hike up Mount Lusen in the Bavarian Forest, he saw an artificial climbing wall in the parking lot. His girlfriend said: "Try it ... come on!" For the first time since 2003, Michael held on to a climbing hold again. It was fun and Michael toyed with the idea of ​​going back to climbing. After several agreements with his doctors, he was given the okay, but only on the condition that he avoided excessive overhangs and that he would wear a bandage. “I started looking for a suitable bandage for my stomach. But the stoma also had to be protected, as the climbing harness runs over it. Finally I found a company that makes exactly such bandages. Now nothing stood in the way of a restart of my climbing career. "

Michael spent his vacation in the Dolomites and persuaded his girlfriend to try climbing right there, where he first became hooked. He himself got better quickly through consistent training and he thought why not become a professional climber with a handicap. “And so, like at the beginning of my climbing career, I went looking for sponsors. Many of my old sponsors thought it was so great that they promptly agreed to support me again. So my path was back to success." 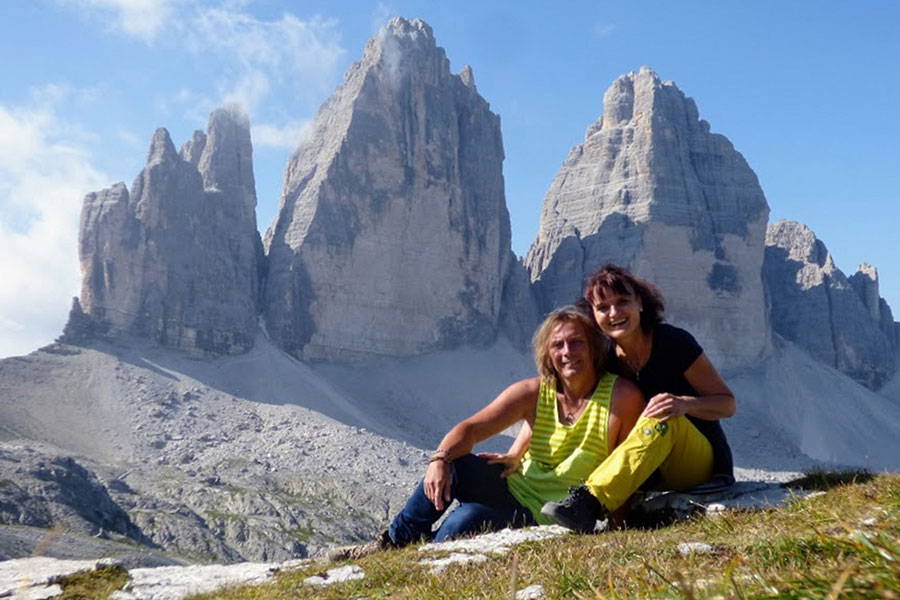 In 2014, he heard that there would be climbing competitions for climbers with handicaps. But his climbing ability was not good enough and Michael increased the training to 4-5 times per week. Climbing and training with additional weight was also on the program again. A year later, after a break of almost 15 years, he competed in his first competition in Imst and finished in 5th place. Not a bad start. The next year the world championship in Paris was on the program. “I worked out a training plan. The DAV also provided us with a national coach for Paraclimbers when a national team for handicapped climbers was founded. ”Michael was well prepared and took a very good 5th place in Paris.

He tightened the training to 5-6 training times per week and got a 25 kg lead vest. The first successes were not long in coming and Michael took second place in the overall World Cup in 2017 thanks to his consistently good performance. 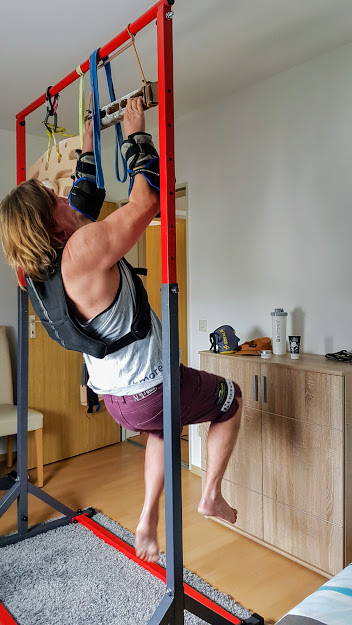 2018 and 2019 were years of ups and downs for Michael, with suffering and joy, with motivation but also with motivation problems. Despite everything, in 2019 he agreed with the DAV climbing center Augsburg to found a climbing group for people with handicaps, which should take place every 2 weeks, but gave up the management of the group in order to concentrate on the competitions again. 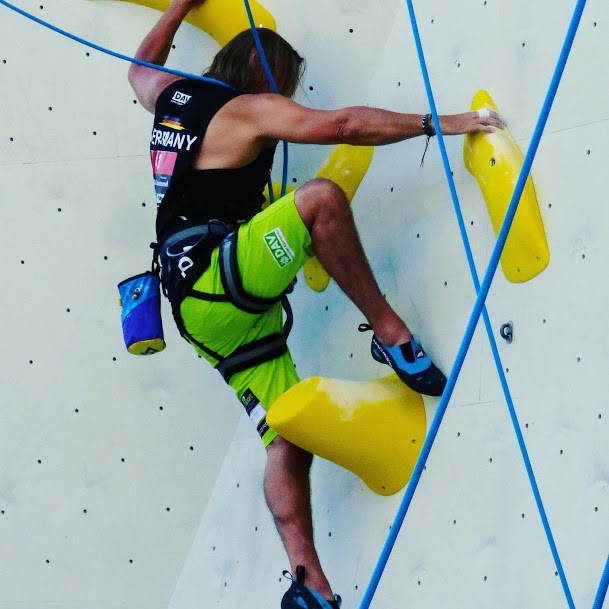