Most standards for rope construction contain a requirement for drop testing. A drop test involves anchoring one end of the rope to test frame or tower and the other to a mass, raising the mass to a certain height and releasing it to see what the impact would be on the user in an equivalent (pretty extreme) situation and how many of these falls the rope can handle before breaking. Standard test data is all based on new unused products tested under specified conditions. As products are used and start to degrade or are used in damp environments, the impact force will likely increase and the number of falls will likely decrease.

What is the standard and what does it mean? 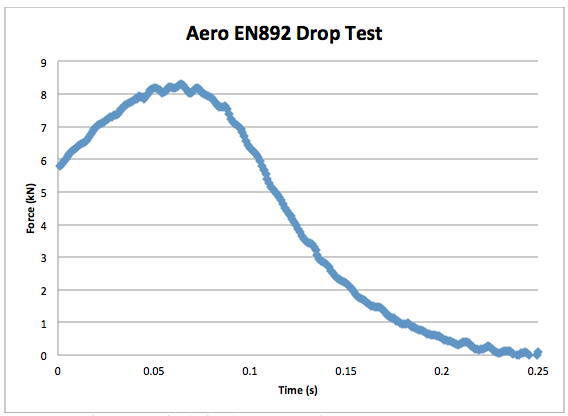 The European standard used to evaluate dynamic ropes is EN892. UIAA 101 is the globally recognized standard used to evaluate dynamic ropes, but it references EN892 for all of the test procedures and requirements. The drop test involves tying a figure-8 knot to an 80kg mass and anchoring the other end on the other side of an edge which represents the rope going through a carabiner. The anchor for this test setup involves three wraps around a bollard before clamping the rope to more closely represent a belay device (with a very static belay) instead of a knot, even though there is no slippage through the clamp on the test tower. The mass is raised to a height that causes a fall factor of 1.7 and released. Fall factor is the ratio of the fall distance to the length of rope active in the system. There is a significant difference between taking a 5 meter fall on 2.5M of rope (fall factor 2, which is the greatest possible) vs. a 5 meter fall on 20M of rope (fall factor 0.25) because a lower fall factor means there is a lot more rope in the system to absorb energy while it is being weighted. To meet the standard requirement the impact force needs to be under 12kN and the rope needs to survive at least 5 of these falls. Most of the time, the rope breaks over the edge that represents a carabiner. In a small percentage of the testing the knot will break, which per the standard invalidates the test. Figure 1 shows a plot of the data collected by a load cell that is mounted to the anchor. 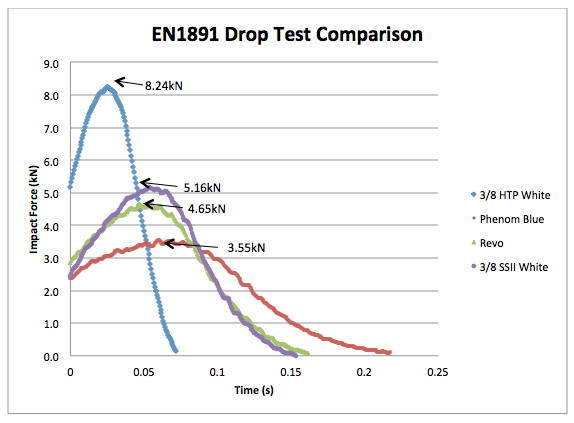 Drop testing is used both in the development of new products and in the quality control process. At Sterling, we test the individual components of our ropes weekly, but to evaluate that the cores and sheath material are put together properly we also drop test a specific sample of the final products that are certified to ensure we do not have any issues in production.