Sterling Athlete Rob Pizem climbed over 100,000 vertical feet on an early prototype sample of XEROS and never even trimmed the ends. He did this as an extreme test of durability. We do not recommend pushing the life of your rope so long. He thoroughly documented the rope’s journey through two blog posts. If you’re interested in the life this rope has had, you can read them here:

This rope was from our first round of field test samples we sent out when testing our XEROS technology over 18 months ago. We asked for it back to see how the water treatment was holding up. While we had the rope, we decided to do some non-XEROS related drop testing since Piz did such a great job documenting how he used the rope throughout its lifespan. 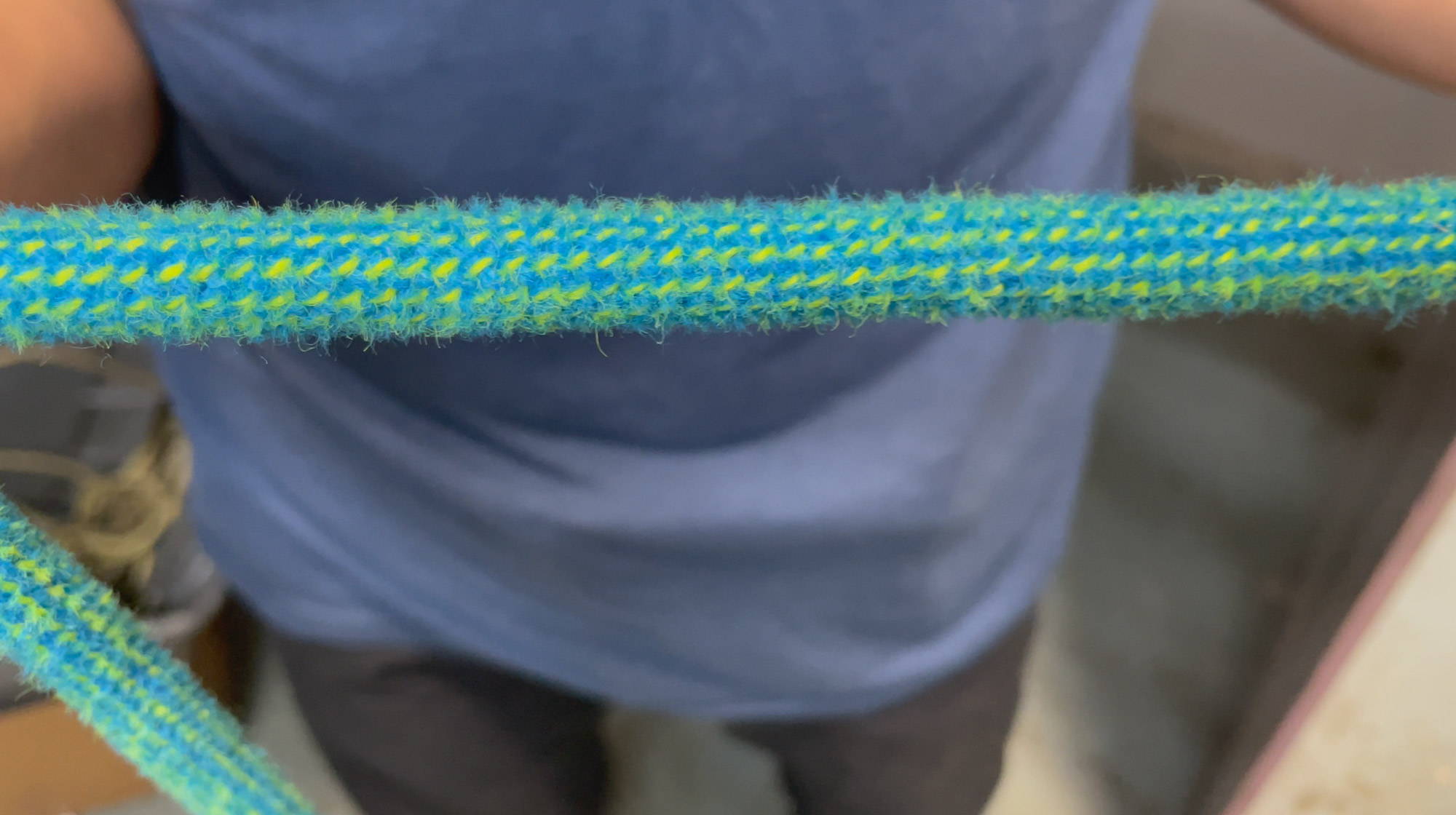 Initial scan of the rope:

When we received the rope back, we could tell the rope was beyond retirement. The last 10 feet on either end of the rope showed extreme wear. That last section of rope is where it runs over the carabiner during a lead fall and that’s typically where soft spots develop.
As we ran our hands over the rope, the worn spots didn’t seem to have any structural integrity left- it felt like a giant fuzzy shoelace. The rope totally failed the “pinch test”- a common way to determine if a rope should be retired or trimmed, even if the sheath is still intact. It’s commonly stated that the pinch test is a practical way to check for core damage. 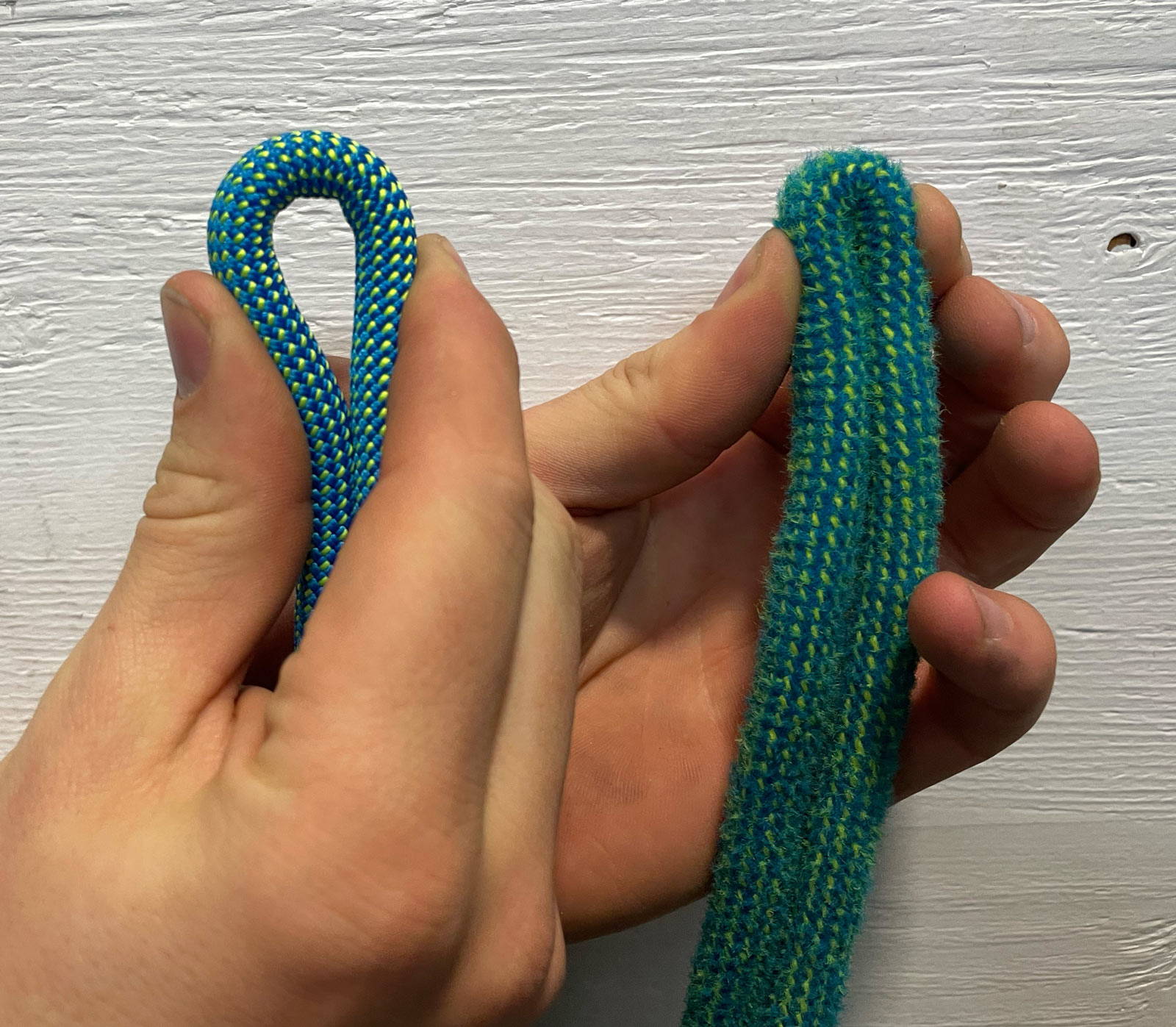 We conducted the normal drop test that is used by UIAA to determine how many “falls” a rope is rated for. This is an extremely severe test that will subject the rope to more force than it should ever see in the real world. It involves an 80kg steel mass taking a factor 1.7 fall onto the rope repeatedly. We think it makes a good point of comparison for how much “life” is still left in a rope. Few things to note about our test:

We tied our mass to the end of Rob’s rope, the same way he’d been tying into it to climb, and we did the first drop. The sheath exploded. Usually, they fail where they run over the edge, but this one blew up in the middle of the rope where the softest spots were.

The mass didn’t hit the ground though, some of the core strands remained intact and they successfully held the fall. 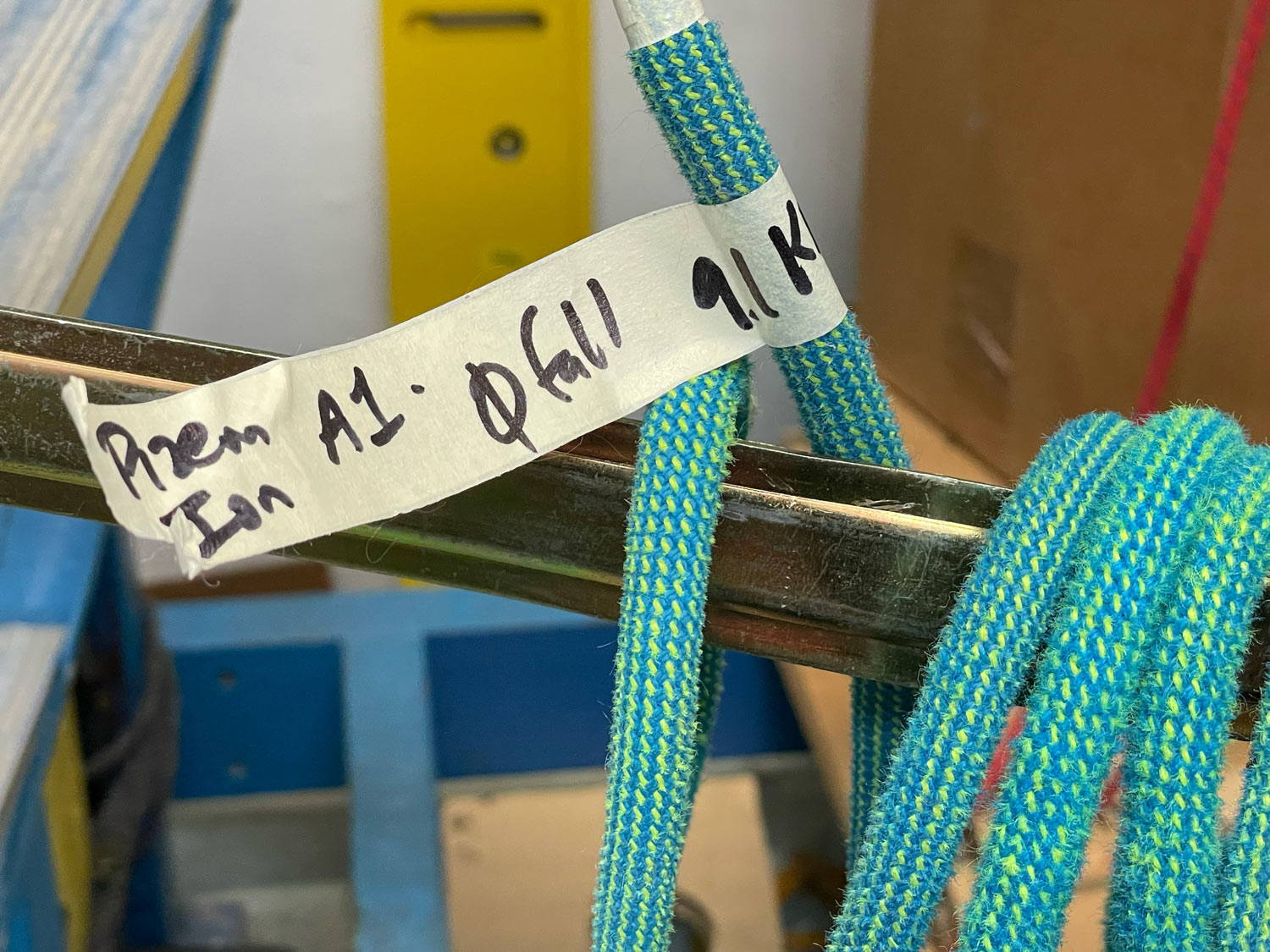 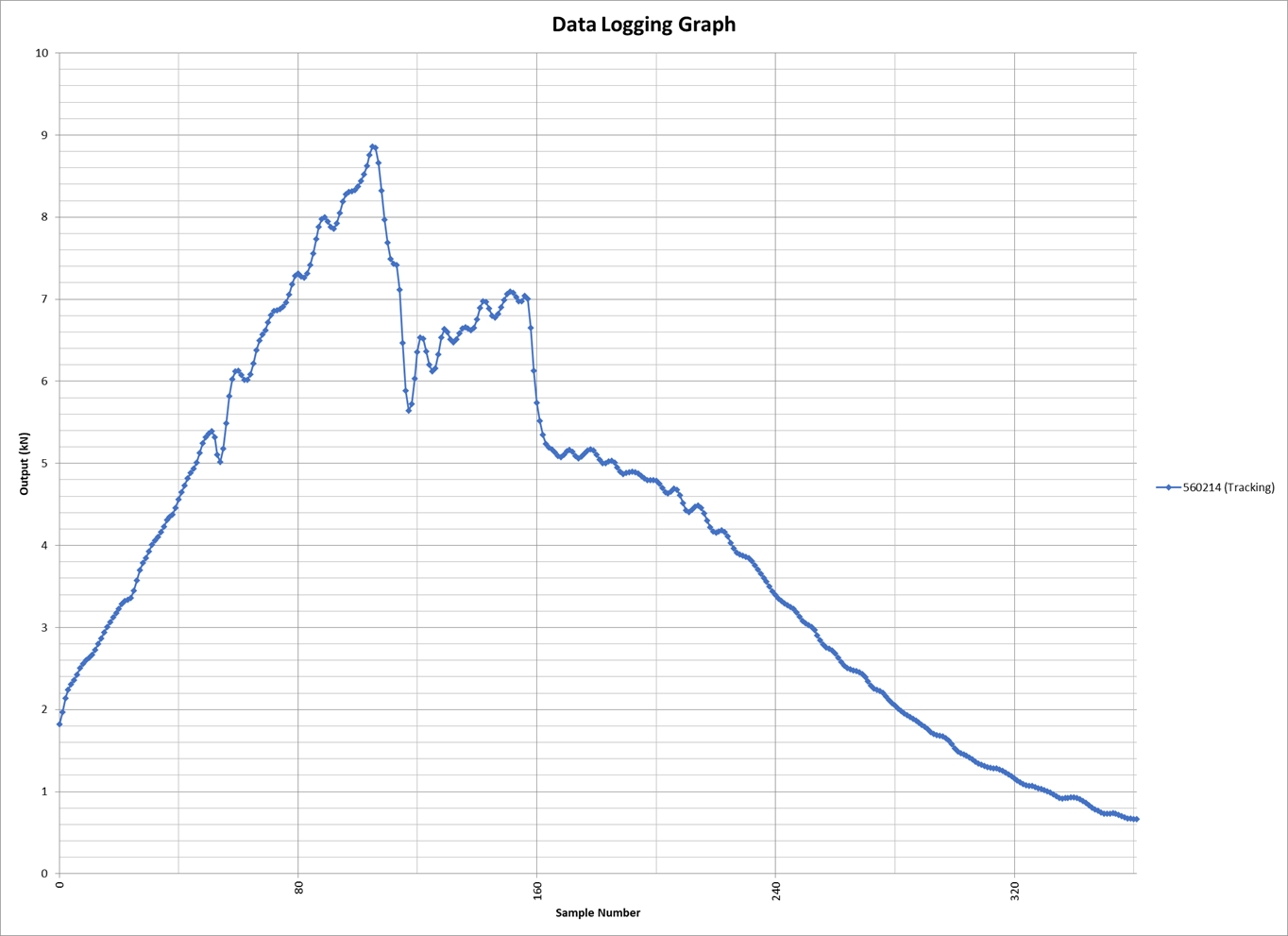 The sharp drop offs in the middle of this force chart represent when the sheath and core strands snapped.

We repeated this test on the other end of the rope. It snapped and the mass hit the ground.

Obviously, the rope was still strong enough to catch a normal climbing fall from Rob (because Rob’s still here with us today), but it went from being able to handle 5+ UIAA rate falls when new to not withstanding a single UIAA rated fall after extreme overuse.

We trimmed the last 5m off the rope (as if Rob had trimmed the soft spot and made his 70m into a 60m). Then we tied that new end into our 80kg mass. It’s interesting to note here that the rope looks very used, but it passes the pinch test and visual inspection, like a climber would do.

The rope held the first fall with no problem, but then snapped on the second fall.
This was a critical result as it passed our visual inspection, but only held for one UIAA rated fall. However, there is some consolation knowing that this rope still caught one absolute worst-case scenario fall after being dragged through 100,000 ft of climbing, rappelling, top rope soloing, and route development.

We wanted to answer the question- does XEROS Dry Technology last the lifetime of the rope? In order to find out, we ran the UIAA Water absorption test on Piz’s rope.

XEROS Dry Technology will last the lifetime of your rope keeping it lighter and stronger in wet and humid conditions.

Climbing rope is very tough, but it doesn’t last forever. You must be vigilant at inspecting your rope. Look for obvious signs of damage like holes in the sheath, weird bulges, or dents in your rope. Also check for soft spots and perform the pinch test on suspect areas, it’s the best way to quickly judge the integrity of your rope. But as seen on the third test, a visual inspection isn’t always 100% reliable, and if you have any doubt in the integrity of your rope, it should be retired. 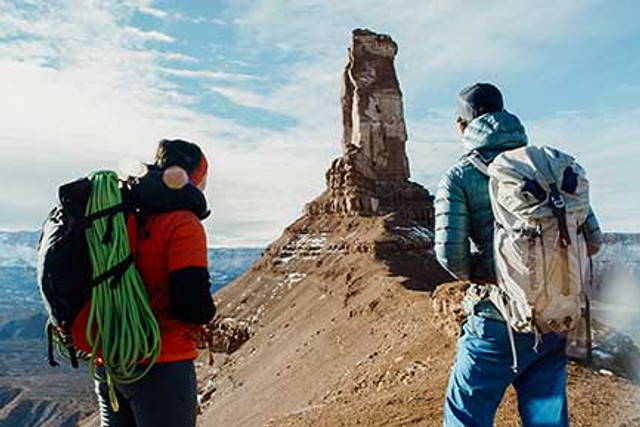 Sterling Rope Company is proud to announce the release of XEROS technology to most of their climbing ropes. XEROS is a new way to manufacture a UIAA Certified dry rope that is more effective, wear resistant, better for the environment, and at a lower cost. 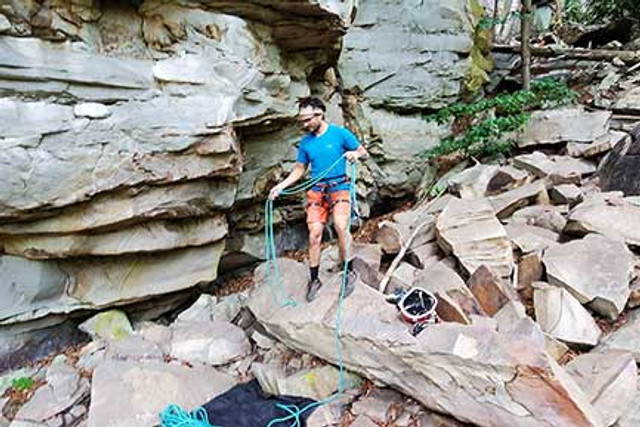 After 13 days of use and over 21,100 feet of climbing, the rope looks and feels like new. The XEROS does not show the “normal” breakdown and softening that regular non treated ropes do and what regular treated ropes do shortly after a few uses. It just didn’t occur. 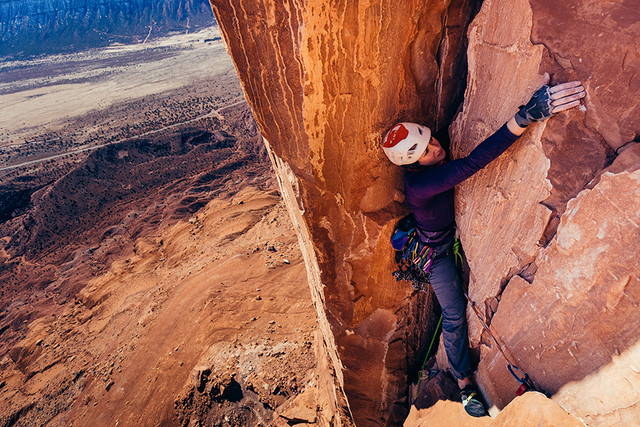 What is Send Ready Coiling?

Send Ready Coil is Sterling’s new process for hanking a new dynamic rope that’s ready-to-climb, straight from the factory. No uncoiling and flaking needed.
Back to Sterling Solid